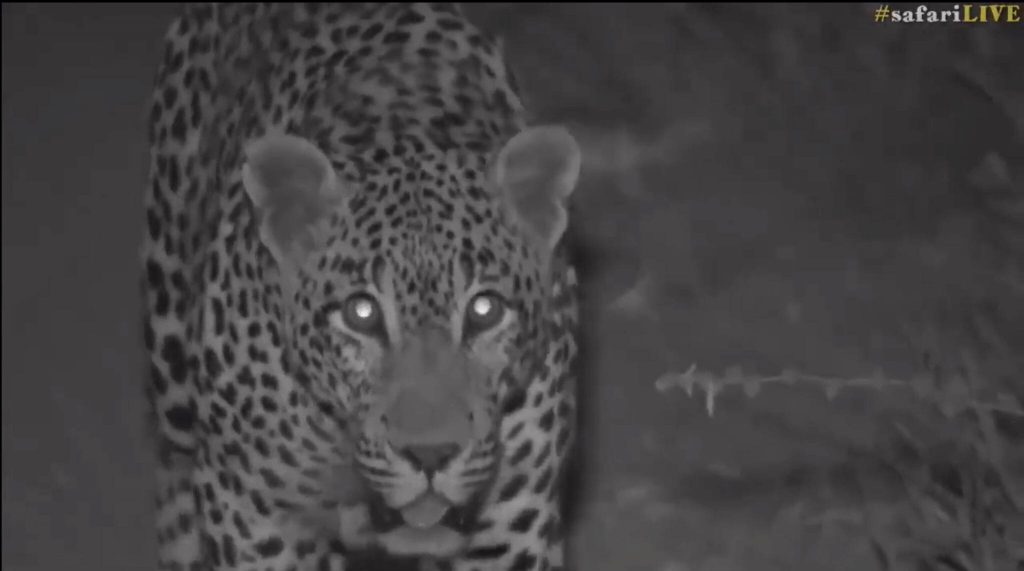 Last minute leopard Tingana sawed his way through the thickets between Gowrie and Buffelshoek cutline, his eyes aglow in the IR. 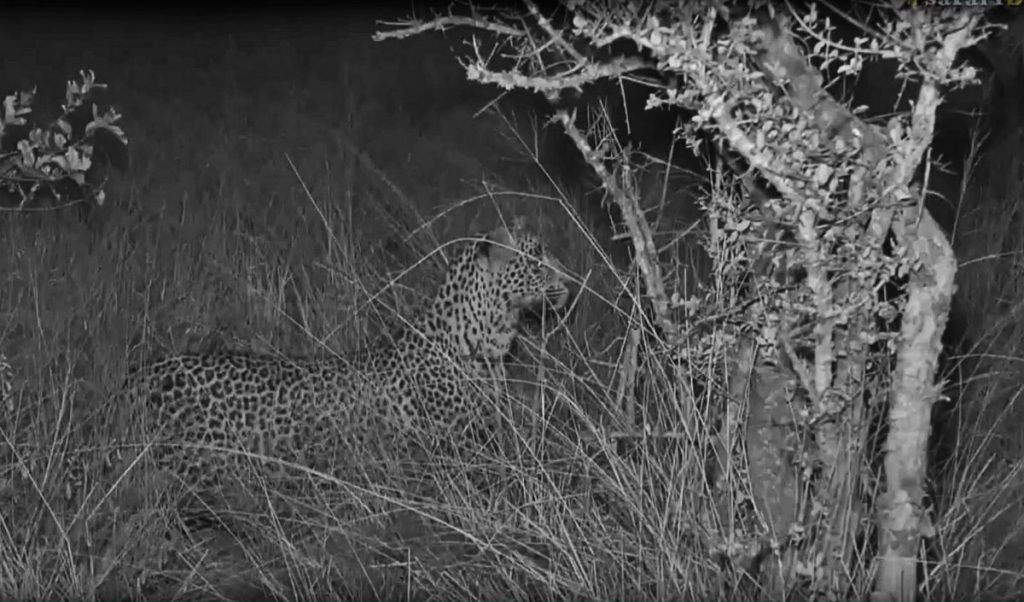 Hosana took us by surprise at Treehouse Dam on sunset safari! WE hadn’t expected to see him and were in actual fact on the trail of elephants. Crouched low to the ground, he looked like he might be hunting.

This time he was found lurking in the Mulwati, the little prince elusive as he slunk silently through the soft sand which betrayed him with a record of clear tracks as evidence of his presence. 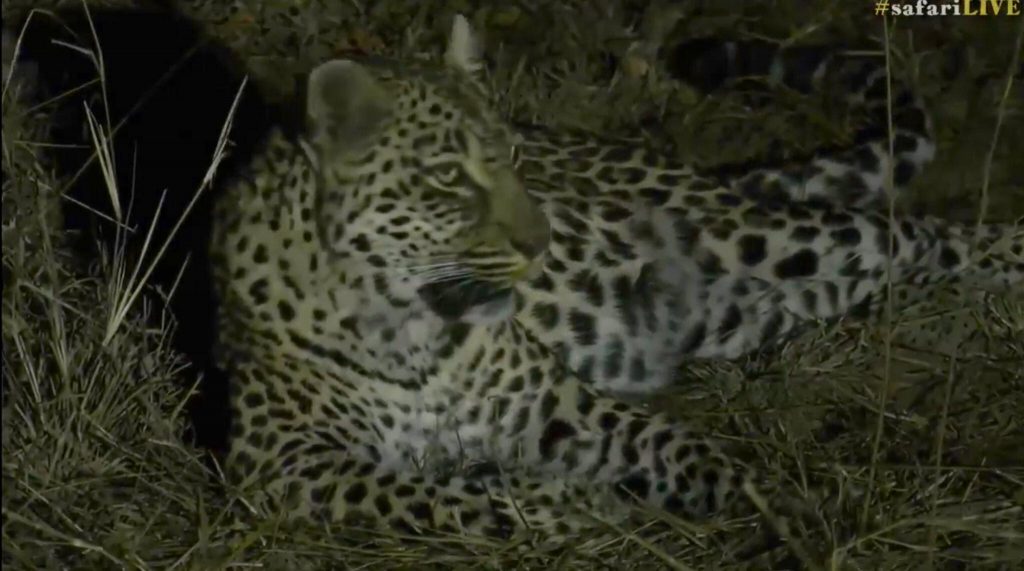 Thandi was found feeding off a duiker kill that she had hoisted up a tree just west of Entrance road. After spotting an approaching hyena, she lept down to devour the stomach contents and some bones that had fallen below – foiling any plans or hopes of scavenging that the hyena might have had.

Poor Xongile looked miserable, having had her kill stolen by the old king Mvula, west of Mvubu road. She watched him from below as he devoured the remains of hard won duiker high up in a tree. 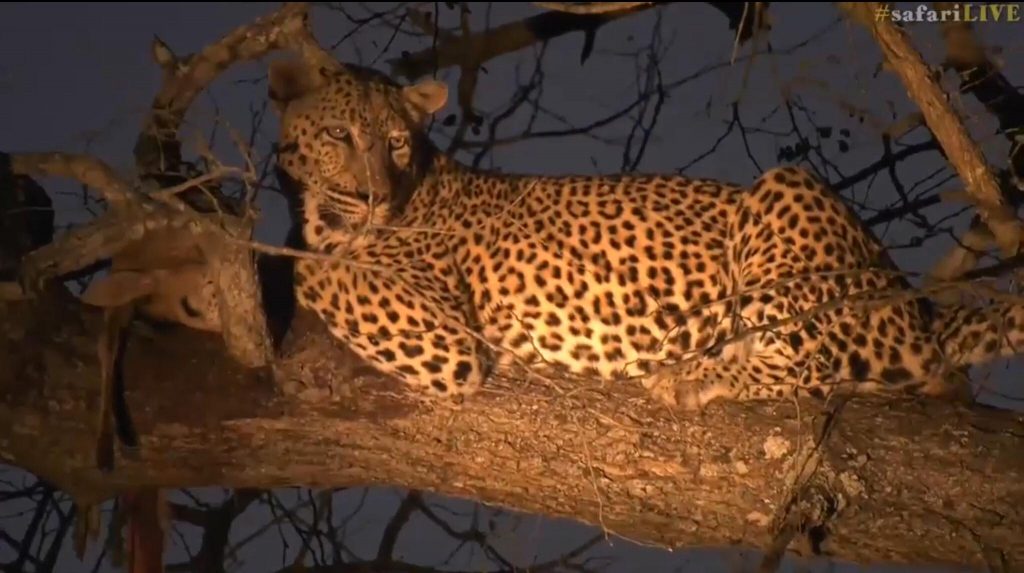 Having absconded with little Xongile’s duiker kill and spending most of the day lunching on his loot, he descended down the sturdy trunk when Xongile moved closer and replied to her complaining chuffs with authoritative growls. Later, at sunset, Mvula climbed back up the tree and ended the day in quintessential leopard style, posed against a dusky pink sky. 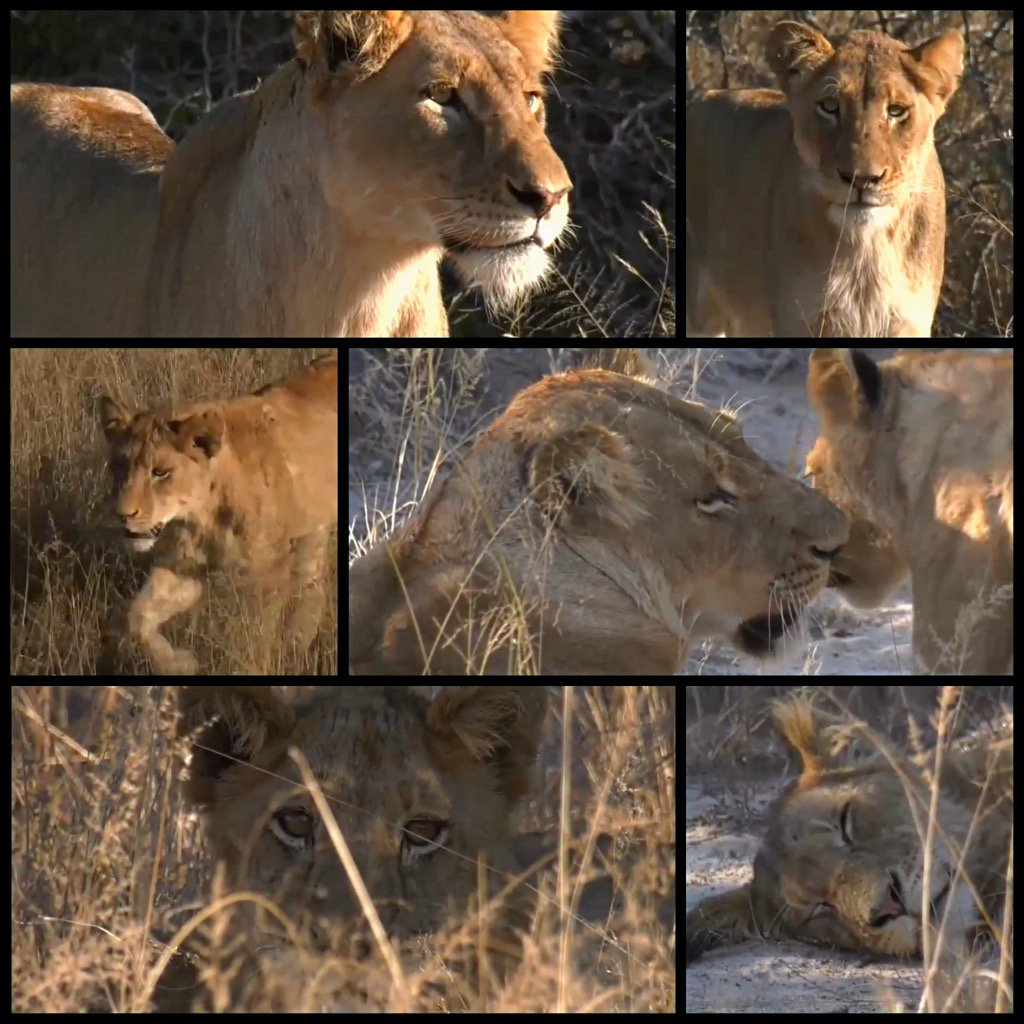 WE watched a endearing reunion between the Nkuhumas, when the absent lionesses joined the rest of the pride and dozing cubs in a dense thicket off Central and Mamba road.

Though the pride was looking thin and in need of a meal, the heat of the day cast a spell of lethargy upon the cats. As a result they spent the majority of their time hunting for shade rather than buffalo.

The pride were moving off from Gowrie Gate and down MMM, eventually disappearing into Simbambili with  Birmingham Boy Mfumo. He was hot pursuit of the ever lovely and ever uninterested Amber Eyes (who was looking not at all  happy with his amorous attentions.) 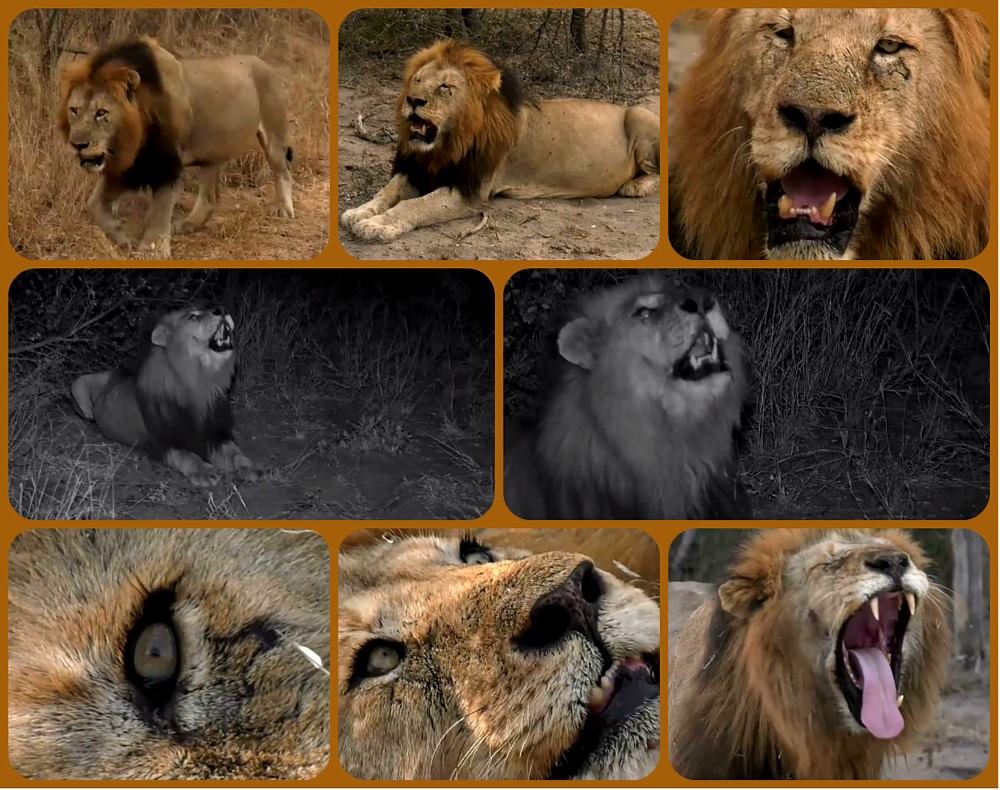 A big-bellied Tinyo spent most of the day digesting what must have been a considerable meal on Pangolin Track. Yet in true lion style, he closed the day with one of the best sounds in the world – a dominant male lion’s roar.

Nhenha, also looking full-bellied from the Zebra kill he had shared with Tinyo, lay on Impala Plains, fat, flat and in a state of digestion.

Mfumo, once again, was in amorous pursuit of the Nkuhuma lioness, Amber Eyes. 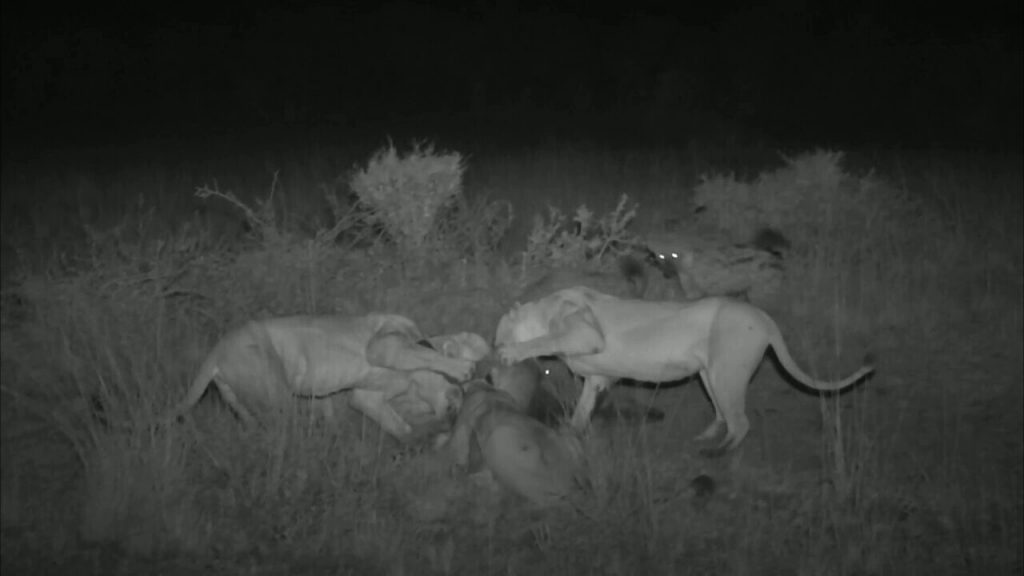 The Mugoros had a night of action, first taking down a wildebeest calf and then having to fight off a massive hyena clan who wanted a share in the fresh meat. Once the lionesses had their fill a young male lion also pushed in on the kill. He fed for a bit before an epic tug-of-war battle won the hyenas the chewed up remains.

One of the lionesses was stalking an impala, pressing herself low in the ground before giving chase. The lucky impala got a head start though, when the rest of the pride called out to the hunting lioness, alerting the impala to her presence.

A single lioness stalked a small herd of impala, waiting patiently for her time to strike. As she made her move they spotted her and then raced off snorting their indignation. She then rested for a bit before becoming mobile again and rejoining her pride.

The pride was flat and relaxing in the long grass after a full night of prowling the plains for a potential meal. 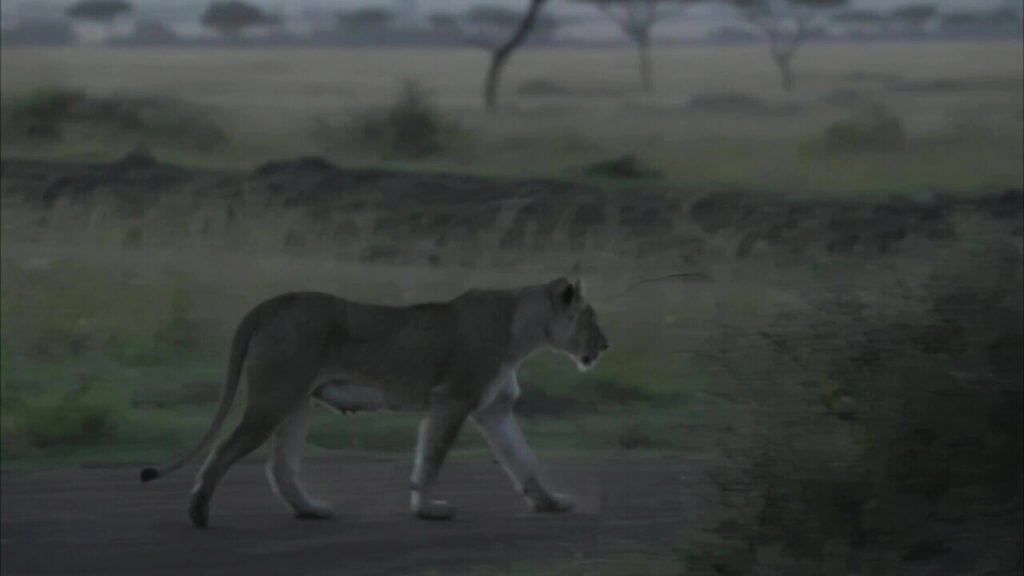 The ten lionesses were on the hunt during the night, stalking and chasing zebra but each attempt met with failure. Two males from the 4km Boys coalition joined them and together they returned to a termite mound to reunite with their cubs who had been left out of the nightly action. The rest of the evening was then spent relaxing and playing.

All ten lionesses lay flat with four of their cubs.

The pride was mobile at sunrise having slept all night, bounding around in the cooler hours of the morning before going flat. Later, a large breeding herd of buffalo spotted them and came over to investigate, chasing off the cubs and lionesses. That night WE were very excited to discover three new cubs, approximately 3-4 weeks old, making a grand total of 13 Angama cubs!

A very weary looking lioness nursed the cubs, while the rest of the pride lay flat.

The lionesses ambitiously stalked a topi, one of the fastest antelope in the Mara. The hunt ended in success and three of the pride lionesses fed off the kill hungrily with the 7 oldest cubs joining in near the end.

The pride of ten successfully took down a wildebeest.  Adults, sub adults and cubs then all fed off the kill before going flat. 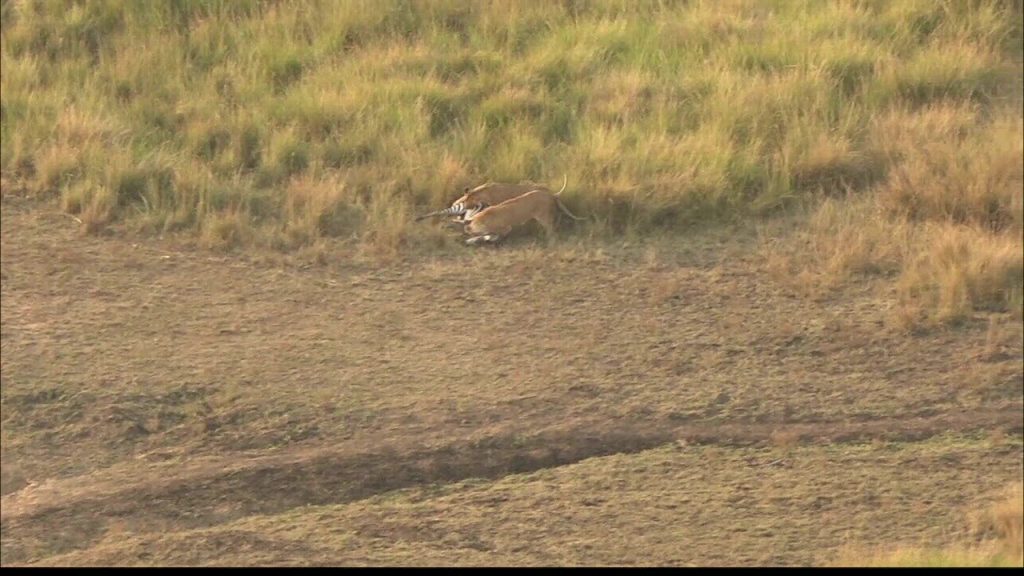 From the serenity of Governors balloon, WE went on an emotional roller coaster ride as we watched a dramatic take down of zebra by a Paradise pride lioness. The zebra, having narrowly escaped death by crocodile, made it to shore only to be caught between the jaws of a lion – a sudden twist of fate that left us stunned.